We are excited to announce that Quebec Hockey Prospect will showcase players at the largest tournament in the eastern United States : the Chowder Cup 2018 edition. Over 100 teams will be participating during the weekend. There will be, as alway a large contingent of Prep School, Junior A, USHL, BCHL, QMJHL, NCAA and NHL recruiters.

The purpose of the tournament is to allow you to further pursue your passion for hockey and at the same time explore the possibility of playing for an American academic program.

The competition will mainly take place in Boston which is a central area for universities and colleges. As you may know Boston is home to six Division 1 NCAA University Hockey programs. In the past years, Quebec Hockey Prospect promoted  and guided several players that committed to the NCAA : 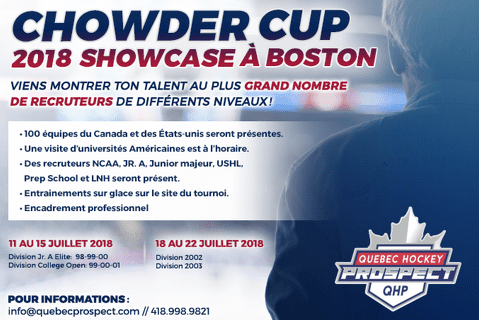